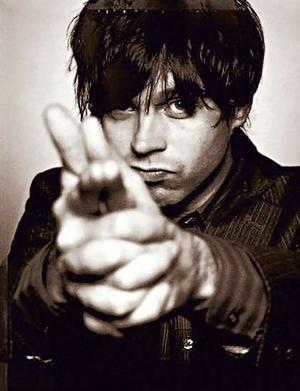 Friday’s “Evening with Ryan Adams and the Cardinals” will be my last. What gives, Ryan Adams? If you hate your own music and your fans so much, why bother touring? Have you not negotiated your recording contract to provide sufficient income to support your, ummmmm, skateboarding habit, or whatever it is that makes you happy post-rehab? (Note: Friends of mine observed Ryan gleefully skateboarding behind the Pageant post-show, hence the reference.)

I thought that absorbing the meaning of grace was part of that whole 12-step thing, but apparently that piece “didn’t take” with you. Demanding assigned seating throughout the venue, a non-smoking environment AND a closed bar on the first floor implied an expected reverence from the audience. Not only did you not return the favor with a basic level of respect for those of us trapped into tiptoeing around our own frickin’ backyards while being subjected to ceaseless, insipid Grateful Dead licks, but you took our presence, wiped your ass with it and threw it back in our faces.

Well, you won’t have me to kick aren’t next time, Ryan Adams. I actually paid cash money to see you this time, but I won’t make that mistake again. I won’t even show if the tickets are free. Two Ryan Adams concerts in a row spent groaning with my face in my hands (this time much to the annoyance of the 2 clueless fangirls next to me, who had no idea they were being spit upon) leave no hope for redemption in my book. I hereby write you off. Too bad, as you were unquestionably capable of so much more. But I’m not even sad for you, because you are an asshole. Either that, or you’re doing a damn fine impersonation of one.

Spencer Marquart Says:
October 9th, 2007 at 4:05 pm
Good lord Dana! Sounds dreadful. A friend of mine saw Ryan in KC a week or so and said he was awful. She was pretty much offended by the whole thing. Sounds like he’s doing his best to piss off everyone.

Sorry you had to pay good money to see bad Ryan. But as Marie stated, it makes for good reading…

dana Says:
October 9th, 2007 at 8:06 pm
Well, at least an entertaining post was gleaned from an extremely annoying evening. My $70 could definitely have been better spent. At least I didn’t buy any merch. Then I’d REALLY be kicking myself.

Becky Says:
October 11th, 2007 at 1:05 am
I’m the friend that saw Ryan Adams last week in KC. He SUUUUUUCKED! Your story sounds precisely like mine, and a friend of mine actually bought the ticket for me. Fuck the seating, fuck the Dead jams, fuck the band practice attitude, and fuck the self-centeredness. I mean, what the hell? He put me in mind of Axel Rose. Seriously. And I, too, think it’s a lot of wasted potential because he can’t get the fuck OVER himself. I’ll never even be PAID to see the guy again. Not to mention, it was boring as hell. We left in the middle of the encore. I can’t believe we made it that long.

dana Says:
October 12th, 2007 at 11:44 pm
Wow, Becky, thanks for posting. Sorry that you, too, experienced the living hell that I did. Well, at least we have some solidarity in our complete disgust at his behavior. I think he should start drinking again. His last show, before he got sober, also totally sucked, but at least he wasn’t a complete dick.