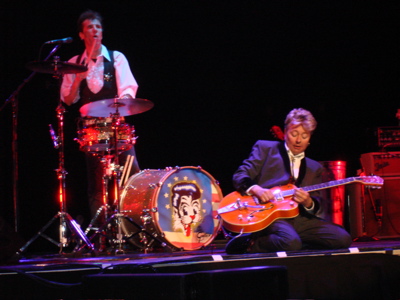 And no, I’m not talking about actual felines.

Finally, my dream of seeing Brian Setzer live has been realized, and with the FRICKIN’ STRAY CATS, no less. My friend Dave the ticket czar scored me 6th row seats at the Scottrade Center for the High School Reunion show last night. Having just seen The Police in row 32 a few weeks back, I can tell you that row 6 on the aisle is definitely the way to go.

I have loved Brian Setzer since Built For Speed was released and have never, ever seen him. I can’t really explain my love for him as I am not a rockabilly chick in the least. He is just a bad ass….cool beyond compare and an incredible musician and I dig pretty much everything he’s ever done.

The Stray Cats were by far the best act on the bill. It is not surprising that they’d trounce (or should I say pounce on? Meow.) ZZ Top and the Gin Blossoms. Okay, maybe the guy in the Smith & Wesson shirt who told me that my shoes really made my outfit (serious!) and the dancing soccer moms a few rows up who sat inexplicably still as stone during the Stray Cats’ set would beg to differ. In my not-so-humble opinion though, Brian, Slim Jim and the other guy (yes….I know his name is Lee Rocker, but I prefer to think of him as the Other Guy) even smashed the Pretenders. 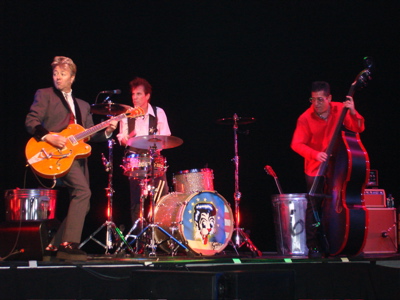 Okay, maybe ’smashed’ is a little harsh. After all, Chrissie Hynde is THE coolest woman in rock, period. Each time I see her, I have the urge to burn anything even remotely girly that I own. I said this to Roy last night and he replied: “I’ll bet Chrissie Hynde doesn’t have beanie babies in her basement”. (Not a euphemism. Ask me about my yard sale.) Here’s one of many great pics I took of her. I had the distinct feeling that she was watching me snap away and was not pleased. I half expected her to curse at me and tell me to stop. I was kind of scared. Plus she made me feel guilty for no longer being an herbivore. Bad Chrissie. Although, I guess that was the point. 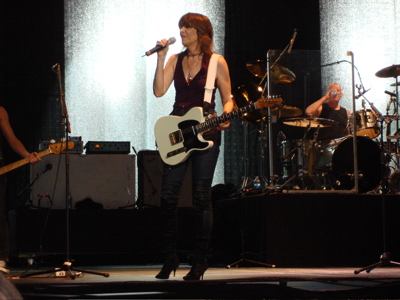 Anyhow….Chrissie is HOT, and always rocks. However, she is also hyper aware of crowd response (or lack thereof) and it greatly affects her mood. This was clearly a ZZ Top crowd. Add that to having less than 40 minutes to play and Chrissie didn’t truly have time or the right crowd energy to fully unleash herself upon us. 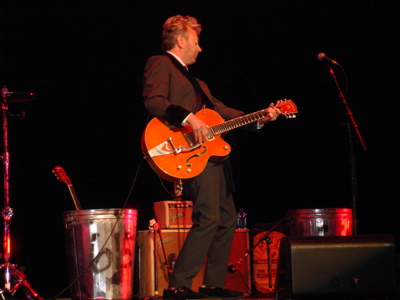 But back to THE STRAY CATS. Despite Roy teasing me with “What if they’re fat?” weeks before the show, they looked and sounded great. Brian took a few songs to loosen up, but then he (and Slim Jim, and the Other Guy who admittedly, is a little on the pudgy side) were so ON. Rumble in Brighton, Sexy & 17, Stray Cat Strut, Rock This Town……I could babble on endlessly as I was truly giddier than I’ve been at a show in 15 years, but I won’t. Just enjoy the pictures and use your imagination. I was NOT disappointed. Except that there were no girly shirts at the merch booth. And they didn’t play Built For Speed. Resisting urge to stalk them and drive to Kansas City tonight……

Oh, and check out Roy’s review of the show for the RFT blog. 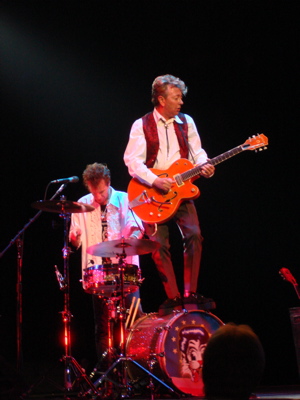 5 Responses to “THE! STRAY! CATS!”
mickey Says:
July 31st, 2007 at 2:57 am
wtf? why is chrissie hynde on this tour….for she is far too civilized for it. she is a staunch vegetarian touring fringe states with southern rock n rollers. she gets what she deserves here. i lover her, but this seems like she has set this up to fail and further alienate people. it’s kind of beautiful in a sick way. meateaters are such grumpy assholes if suggested they are in the wrong…maybe that gut reaction is truth speaking. karma is a bitch. chrissie, just do a small club tour of east and west coast states will ya?

dana Says:
July 31st, 2007 at 6:25 pm
Dude, I hear you. It was a bizarre lineup, to say the least. Chrissie Hynde did NOT need to be “opening” for ZZ Top! I would much rather have seen The Pretenders headline their own show in a smaller club. Same with the Stray Cats. Sets were way too short!

As far as her vegetarian comments, I think your read on the reaction likely applied to 95% of the crowd. My own personal reaction was based on the guilt of being a former vegetarian (10 years!) who has fallen from grace. I know she’s right but admittedly, I’m not living it. I blame bacon.

tbone Says:
August 3rd, 2007 at 10:29 pm
I couldn’t agree with you more about the Stray Cats. They were fabulous and I seriously considered going to Kansas City as well. Wish they could come back to play at The Pagaent!!

Awesome pics too. I’d love to see the Pretenders too. Chrissie is bad ass all the way. And if they want to do a club tour – they’d be perfect for the Pageant. This reunion show looked interesting. Kinda like my high school reunion coming up next year. D’oh! Intriguing, but do I really want to go there?! ZZ Top might be there??

dana Says:
August 15th, 2007 at 7:50 pm
Thanks, Spencer! I’ve got LOTS more great pics of Chrissie Hynde, despite the fact that I seriously thought she was going to climb off the stage and kick my ass for taking them. The risk was worth it.