One of the many things I love about Austin, it’s just one good hair day after another. Not sure why that is….something to do with the climate and/or the water, no doubt, but as I don’t have many good hair days, this is a phenomenon that does not go unnoticed. Once again, I digress.

Thursday’s action was delayed a few hours due to our seemingly neverending web issues and blogging demands (obviously not demands on me, as I’m just now blogging about the trip). I’d wanted to stop by the Found Magazine party, more to try to schmooze with Davy Rothbart and pick up the new Dirty Found magazine than to see music. I decided to skip it due to our late start. Roy headed to the Twangfest/KDHX party to see Mic Harrison. I opted to go to Waterloo Records to see Lily Allen, queen of Myspace. 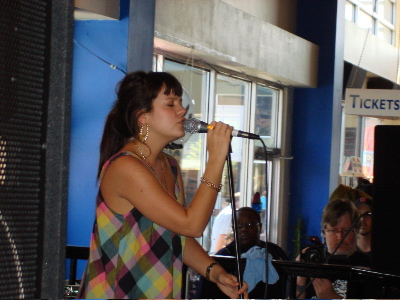 The line of 200 people waiting to get into Waterloo for Lily’s 2:00 set wrapped around the building. I almost didn’t make it in. I’d never seen an in-store at Waterloo and wasn’t sure what to expect. They have a nice stage set up and know how to handle a crowd, obviously having done this a lot.

As for Lily, quite frankly, I did not WANT to like her because of the hype. I’d heard of her, but hadn’t heard her music until KDHX played “Friday Night” on Monday as we drove out of town. I didn’t really love or hate the song. I thought it was cute (probably not the intended effect), and I was intrigued by Lily’s story, her youth and her Britishness. The reviews of Lily’s show the previous night at Stubb’s weren’t particularly favorable. She was criticized for a flat performance and crude stage banter. I figured she couldn’t be more wack than Fiona Apple at age 17, who I’d seen at Mississippi Nights. Talented, yes, but a train wreck when she opened her mouth between songs. 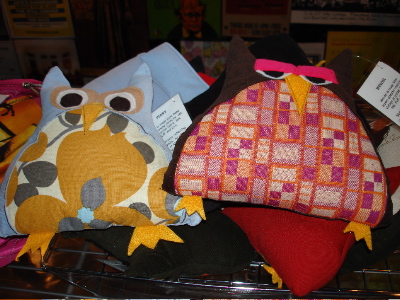 (Cute DIY owls for sale at Waterloo Records. They each had names!)

Well, Lily turned out to be completely likeable and adorable. Her look and manner were unpretentious and relaxed. Her voice was true to the recordings, just imperfect and unusual enough to be interesting. She did a short 4 song acoustic set, including her hit “Smile” and an excellent version of “Heart of Glass” during which she lost it only slightly by melting into laughter during an attempt at whistling. Great set, and a no regrets choice. 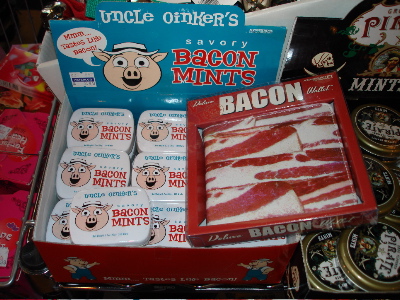 (Bacon wallet! Bacon mints?!?! Even my beloved bacon can be taken too far.)

I had some time to bum around Waterloo while waiting for Roy to retrieve me, so I in addition to the music (picked up Lily’s cd for $11 and a Daniel Johnston cd & tank top), I checked out Waterloo’s excellent gift offerings. In addition to the usual pop jokey items, Waterloo carries local DIY, some of which is great, some of which is only passable and extremely overpriced. (Man, $50 for a simple tote made of vintage fabric. Now that’s what I call DIY confidence. Or DIY lunacy.) In addition, Waterloo carried an impressive selection of bacon themed items. Who knew? 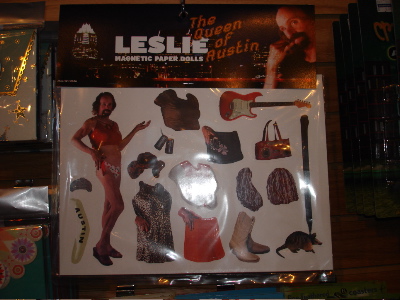 Also available at Waterloo: the Leslie the Queen of Austin magnet set. I’ve seen Leslie prancing around downtown in his cowboy hat and Speedo-like skivvies. We also sighted him on 6th Street this week. Not pretty. We can only hope no one in St. Louis decides to market a Beatle Bob magnet set. Some people just don’t need to be immortalized in the form of a dress up doll.

Caught my ride in the parking lot, and we made our way back to the Twangfest party at Jovita’s to catch Big Sandy and Los Straitjackets and grab some food. Unfortunately we heard most of the set from our table around the corner from the stage as the kitchen was overwhelmed. We did manage to scarf our lunches in time to watch the last few songs and the encore. That Big Sandy is one smooth dude. I can’t think of anyone smoother. I’d not heard him sing in Spanish and preferred this set to his English performances. He seemed to take on a different energy. 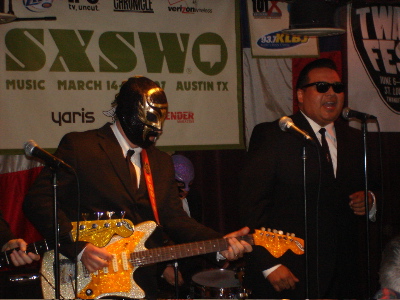 (Big Sandy and men in scary masks, aka, Los Straitjackets.)

Los Straitjackets smoked, although the mask thing kinda freaks me out. Maybe it’s due to my fear of KISS as a pre-teen. I remember going home from my best friend’s house at the end of the street and doing this run/walk thing, stopping every few yards to turn my head and make sure KISS weren’t storming out of the woods after me, a la “Destroyer” album. Yeah, I was a weird kid.

After the show, I saw a Straitjacket peeling off his mask and shirt near the open door of his van. I was on the other side of the van and could’ve gotten the perfect paparazzi photo of the unmasking/de-shirting through the van window. I decided that move was a little too Us Weekly even for me and spared the guy the loss of his mask mystique.

Roy needed to blog for a bit, so our next stop was Jo’s coffee on South Congress. I had about an hour and didn’t like the bands who were playing at Jo’s, so I headed up the street to New Bohemia, an excellent vintage clothing shop and frequent stop during my visits to Austin.

It was at New Bohemia that I spotted the boots that broke my heart. I’d just seen a fab pair of slouchy, perforated white leather boots by Diesel in a magazine. (Jane, I think.) These boots were likely the inspiration for the Diesels….they were the spitting image, but with a bit of a western flair. I always think finding the vintage original is cooler (not to mention, cheaper) than buying a new “retro” piece. Unfortunately, altho I could cram my feet into the boots, the dream was not to come to fruition. Altho I’ve been known to suffer in the name of fashion, a half shoe size too small is one thing, but 2 sizes is another. Sigh. At least I scored a sweet 70s polyester dress (in a very Diane von Furstenberg fabric) for $20. 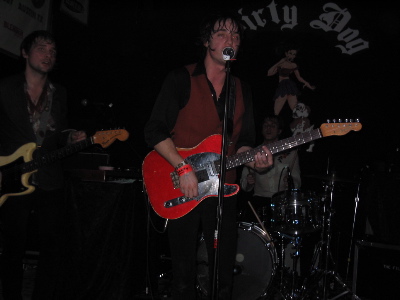 After a quick sandwich and a beer at Jo’s, we drove back downtown to the center of the madness and parked the car for the night. Next stop, The Dirty Dog to see The Films and Apollo Sunshine. It was at The Dirty Dog that I encountered my first in a series of energy drink ripoffs.

Absolut and Red Bulls are our SXSW drinks of choice. They are refreshing, energy imparting and pure hangover-proof magic. I’m not sure which lame-o energy drink (might’ve been Monster?) our boobiliscious bartendress passed off as Red Bull, but it was nuclear green and sickly sweet and might’ve been more aptly dubbed Bug’s Blood. (Not that I’ve ever tried bug’s blood.) I wouldn’t have minded so much if she’d said “We’re out of Red Bull.”, but that was apparently too difficult. 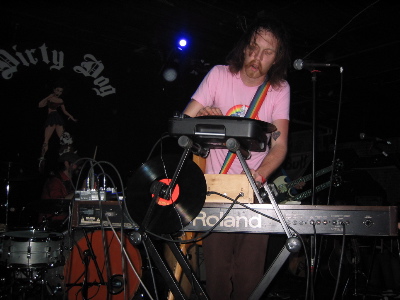 (Apollo Sunshine, are, um, not hippies?)

Anyway. The Films were alright, but reminded me too much of too many other bands (albeit bands that I like, like Ok Go) and not enough of anything new, so I more or less spaced out through their set. Roy loved Apollo Sunshine. I did not. At all. I found them very spacey, hippie jammie, although their actual genre is still under debate. They are good musicians and clearly know how to rock, but I did not relate to their attempts at arty noise. Plus, (shallowness warning) they had that Jeff-Spicoli-just-rolled-out-of-the-smoke-filled-hippie-bus look and that put me off them as well. 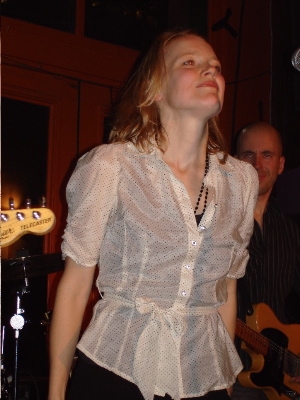 (Kelly Willis. Poster girl for the fountain of youth.)

Luckily, my palate was duly cleansed by the sublime K (aka Kelly) Willis show (at Friends on 6th) which was easily the highlight of the night. True to the gossip, Chuck Prophet played guitar with Kelly and her band. After this set, I was happy and could’ve been done for the night.

It was at Friends that energy drink incident #2 occured. Once again, an alternate energy drink (Rock Star, I think) was passed off to me as Red Bull by a busty girl waitress. Coincindence? Hmm. To add insult to injury, I was charged $13 for this drink! Yes. $13. 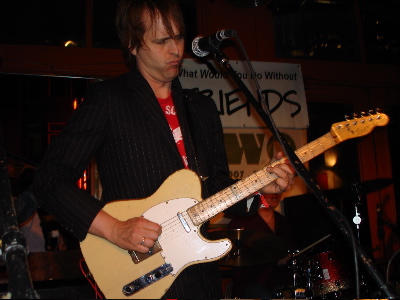 I hung out on 6th Street and chatted with my friends Mona & Tina for a bit until they left for the super secret David Byrne show at the San Jose, then walked to the Convention Center to find Roy who’d gone to see Alejandro Escovedo’s “garage band”, Buick MacKane. I managed to catch the last few songs of the set. Luckily, I didn’t miss much except a whole lotta noise and Alejandro in a tight black hipster t-shirt. 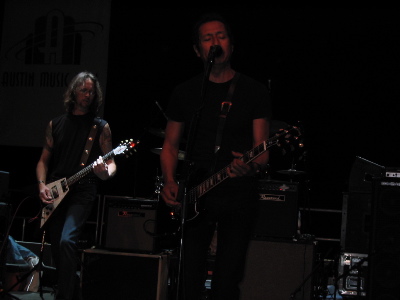 We tried to get into The Reigning Sound/Mary Weiss show. After being entertained in line by a VERY drunk but sweet slurring girl who was verging on suicidal at the thought of not getting into see The Reigning Sound, and who asked Roy if she could lean on him because she had a broken foot (all the better to walk around 6th St on for 4 days!?!?), we bailed. The badge line was long, and it was clear we lowly wristbanders weren’t going to make it in the door. 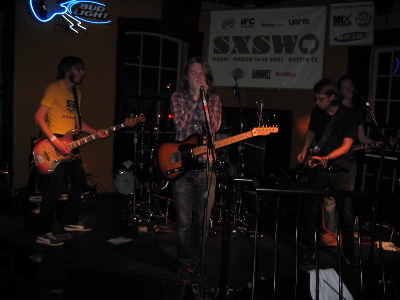 I believe we were shut out of one other venue before opting to end the night at the ridiculously named Uncle Flirty’s, which featured a lineup of Scandinavian bands. We walked in on Rubik’s set. They were small but mighty, as in mightily LOUD, and reminded me a little of Coldplay. Next was David and the Citizens, who turned out to be a guy, a gal (not much of a citizenship) and a lot of prerecorded sounds. They did play some of the music…on keyboards and guitar, I think. (Yes, my descriptions are beginning to suffer as at this point in the night I was slipping back to overload/space out mode. I blame the sub par energy drinks for reducing my level of clarity.) I did like them though. Nice indie pop. 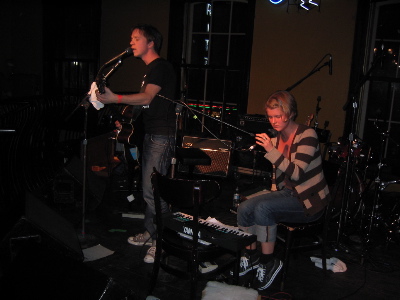 At Uncle Flirty’s I received payback for the energy drink debacles of the night. An overzealous bartender took Roy’s mostly finished drink away and when I complained, I got a free one. It was strong, and it was Red Bull. Finally.

3 Responses to “SXSW 2007: Day 2 – The Queen of Myspace, 2nd tier energy drinks & the boots that broke my heart”
Spencer Marquart Says:
March 27th, 2007 at 8:16 pm
Totally enjoying this blog Dana! Only 2 days into SXSW and I’m exhausted. In a good way of course. Wonderful insight, humor and pics to go along with it. And I like L. Allen too. Catchy shit indeed! Keep the cool posts coming!
Spence

Roy Says:
March 28th, 2007 at 4:29 pm
Nice recaps! I forgot about the green red bull incident. LAME.
Apollo Sunshine are not hippies and they are not jammy!

dana Says:
April 2nd, 2007 at 12:27 am
Thanks, Spencer! Stay tuned for more SXSW blogs. I’m deep into my taxes this weekend…bleh…nothing like procrastinating….but will finish up the SXSW blogs this week. See you soon, I’m sure.