Lots of music to blog about, but first, a rant:

Anyone who’s ever taken a road trip has surely seen the “La Quinta is Spanish for high speed internet access” billboards near the highway. Well. Roy was committed to blog about SXSW all week for Amazon, and I’m just addicted to email and ebay (and not necessarily in that order), so the interweb is muy importante (I don’t speak Spanish dudes, so if that’s wrong, sorry) to both of us. We spent a good portion of Wednesday a.m. frustrated about the La Quinta Oltorf’s LACK of operable internet access. I mean, Austin is only one of the most wired cities in the U.S.! WTF?!

As he had a job to do, Roy’s frustration level about the situation was understandibly higher than mine. I believe his exact words were “Let’s trash the room like rock stars. Do you think Jack White would stand for no internet access? I think not.” Ahmed on the 866 help line finally sorta helped us. The front desk girl was clueless and useless and not even nice. This will not be the last La Quinta hears from us. It’s not like this room was $50, it was $120! Eesh.

And oh yeah, don’t even get me started on what we dubbed “the Mexican king-sized bed”. (Disclaimer: I am not a racist. I love everyone, truly. I’m just a very un-PC-at-times smart ass.) When we climbed in bed last night both of us noticed that our feet hung off the end of the bed. I’m only 5′7″ people! Why, why, WHY did I not try harder to get into the San Jose???? Even though the San Jose’s cheapest room was supposedly going for $300 a night, guests got an invite to the FREE, super secret David Byrne concert held in the San Jose courtyard on Thursday. (My friend Mona said that he played with his Brazilian band and that it was SWEET. Dang.) We, on the other hand, got cheap sheets and outlets that didn’t work. 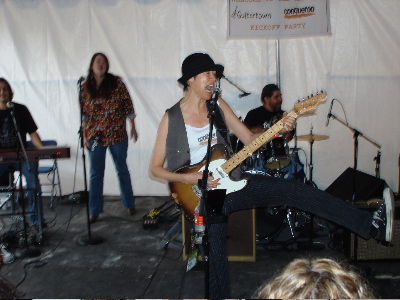 Eventually, we left the hotel and started the day at Mother Egan’s Irish Pub. First we saw Michelle Shocked. I don’t know what I was expecting, but it wasn’t what I saw. She was belting out the blues. She was interesting, if not completely enjoyable. Roy said her last song was more typical Michelle and was pretty great. I missed it however, as I was inside getting the best Bloody Mary in Austin. Priorities.  Next was Scrappy Jud Newcomb. I liked this set MUCH more than the quick 3-songer he did the previous night at The Hole in the Wall. 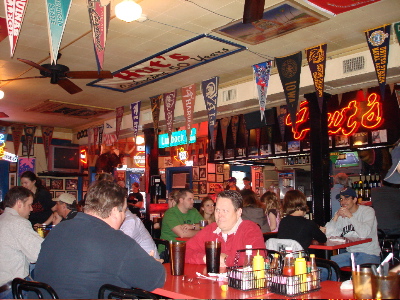 We bailed to feed the meter and our faces, and grabbed lunch at Hut’s Hamburgers, a Kinky Friedman favorite and a place I’ve been dying to try for quite awhile. It’s great, a semi dive-y diner-ish atmosphere, with a stuffed buffalo head and vintage pennants on the walls. There are at least 20 different burgers, many of them named after people (“The All American Buddy Holly”), ginormous onion rings, blue plate specials, salads and veggie burgers, too. It was excellent. No celeb sightings, dang it, although Roy faked me out by saying that Kinky F was in the room…he totally made me look. 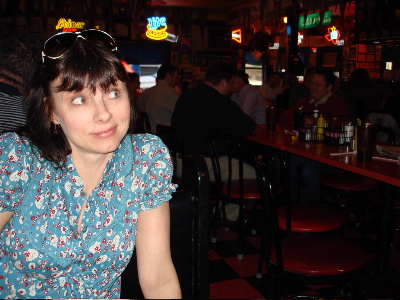 (Me at Hut’s, stealthily looking for celebrities.)

We decided to head back to Mother Egan’s for awhile. We caught the tail end of David Olney’s set, then saw one of the rockenest Jon Dee Graham sets ever. He was more hilarious than usual too, joking about being told that it was not possible to rock out in a ratty old sweater. Personally, I thought he looked rather J Crew. (This is when we were beset by technical issue #2, my camera battery dying, with the lens open and extended, no less. Grrr. At that point, we were forced to resort to cell phone photos. Not ideal.) 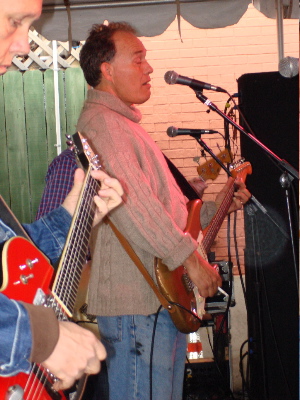 (Jon Dee rocks the “ratty” sweater. I think it’s a good look for him myself.)

Pam Tillis followed Jon Dee. I knew nothing of her, but loved her. She looks great (she can’t really be in her late 50s?) and her voice is strong and sweet. She crooned a handful of traditional country tunes. Next was one of our favorites, the surly but incredible James McMurtry. I think I’ve seen him play the same set about 4 or 5 times in the past 2 years, but never tire of it or him. I wish he’d come to St. Louis. We wanted to check out Tommy Ramone’s bluegrass band, but needed to head back to the hotel to deal with our technical issues. 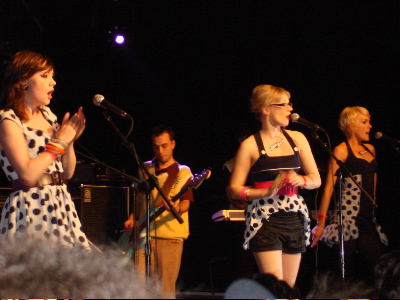 (How did I miss the audition for the Pipettes? I totally have the clothes for this gig. Oh yeah, they’re Brits.)

A few hours laters, we raced off to La Zona Rosa to see the very adorable (but not especially talented) Pipettes. I would describe them as 50s retro cheerleader Spice Girls. They are very cute, I will give them that, and they were entertaining if a bit sloppy. The crowd wasn’t that into them, but I didn’t regret checking them out. Like them or not, they were one of the buzz acts of the festival and played about a million gigs. 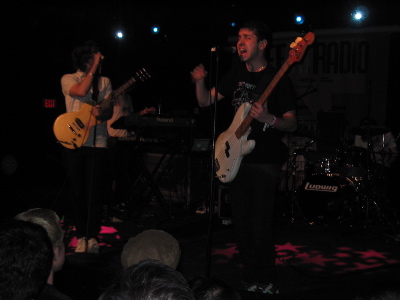 (Hipsters danced throughout The Rapture. I attempted poking my eyes out with a drink straw.)

We stayed for the next band, The Rapture, and somehow survived. (T-shirt opportunity: “I Lived Through The Rapture”.) Going into the show, we thought they were a metal band. They turned out to be more like a techno jam band with a little Oingo Boingo (they wish!) horns added in. The hipster kids loved them. I did not. I got separated from Roy, who went up to take a picture for his blog, and had to endure 40 minutes of Rapture noise. Our friend John kindly hung out with me; I’d’ve fled the scene if I were him. We finally found Roy and got the hell out of there. Funny when the set first started the lights were still up high for the Pipettes. After 2 songs, The Rapture boys asked for them to be dimmed. Good move. Not attractive fellows. And yes, I am shallow that way when it comes to bands.

The 3 of us walked to 6th Street to catch the Americana showcase. The first act we saw were the Holmes Brothers who were incredibly sweet and soulful and the perfect antidote to The Rapture. Their cover of “What’s So Funny About Peace Love and Understanding” was awesome. I’d say it was better than Elvis Costello’s….I know, blasphemy! BUT, I don’t really like Elvis Costello. (I know, double blasphemy! Believe me, I have tried. Buddha knows, I’ve tried.) 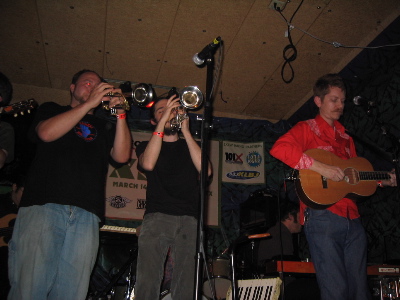 (The Theatre Fire. I’d put the girl right there, between the dude in the red shirt and the mic stand.)

Taking a break from Americana, we moved on to a weird little hole in the wall club – 710 – to see The Theatre Fire, aka, CalexiFire. They were good if a bit derivative. (I stole that word from my boyfriend, the music critic. Impressive, huh?) I think, however, that they need a chick in the band. At a minimum, she could play those cool cut-off hand held glockenspeil things they were banging on. She could also take their overall appearance up a notch. (Dream job: Band stylist! Any takers, email me at dana@mailorderbridevintage.com.) 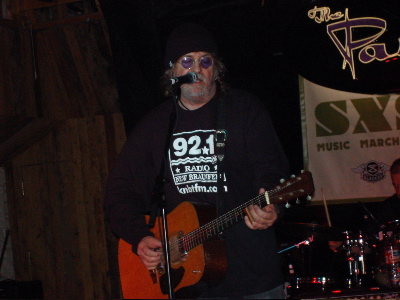 We scrambled back to the Americana showcase to catch Ray Wylie Hubbard’s set, which was easily my favorite of the day. I’m not sure what I liked more, Ray’s smoking country/blues/rock or his stories. He told about writing the song Polecat (which is a skunk, fyi) as a romantic gesture for his wife. LOL. And, when introducing the band Band of Heathens, Ray Wylie congratulated them on their Austin Music Awards win and said, “They would be like if you formed a super group made up of Springsteen, Dylan and me”. Ray’s son Lucas joined him onstage, as did Buddy Miller. My description is not doing this set justice. It was astonishing. Truly. 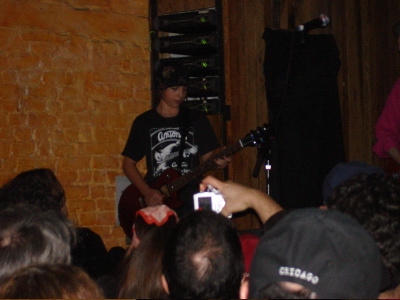 Finally, we caught the 1:00 am. Patty Hurst Shifter set. We were exhausted, but I’m glad we made the effort. AGAIN, they fucking rocked out. So much so that I was compelled to buy their merch with my last $20 while gushing to the lead singer (and head merch man). 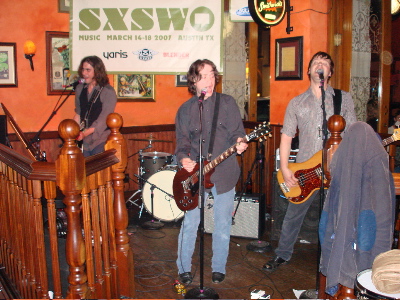 (I like Patty Hurst Shifter. They get 2 photos on the blog. The jacket on the post is not a band member.)

Thankfully for my feet, Roy used his last $20 to pay for a pedicab back to our car. Dream job 2: Pedicab driver. You’d be in such great shape!  (Our driver said he wore pants smaller than his girlfriend.  I told him he’d better add 20 pounds.  Girls don’t like boys who wear smaller pants than they do.  I don’t know how skinny legged hipsters ever get dates.)  During the ride back, I told Roy we should start a pedicab company in St Louis. His response “We can’t. People don’t go anywhere in St. Louis. Where are we going take them? West County?”

2 Responses to “SXSW 2007: Day One – La Quinta is Spanish for “Pedicab it on a stone tablet””
Heather Says:
March 22nd, 2007 at 3:39 pm
HOW are you friends with Cat when if you don’t like ELIVS COSTELLOOOOOOOOOOOOOOOOO???

dana Says:
March 22nd, 2007 at 11:45 pm
I KNOW! Believe me, I TRIED to feel Elvis. I camped out for 6 hours in the 110 degree Texas sun at ACL 3 years ago to be up front to see him for the first time. And since that didn’t take, I saw him again last time he was here. Although I did enjoy both shows, I just didn’t get hit with the mania. But at least if he were ever divorced, we wouldn’t have to fight over him. We can’t all love the same man. That’s why there’s Rhett Miller.