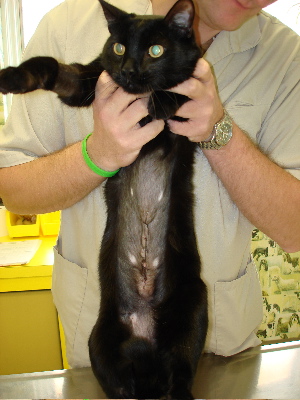 (The Cash man before my vet removed his stitches.)

I was settled in for what I’d hoped would be a chill Sunday evening……hanging on the couch, lazily taunting Cash with one of his favorite toys: a laminated bookmark with a beaded nylon cord. Cash pulled the bookmark out of my hand. I was watching Prince play half-time, pondering why in the hell he’d chosen to wear a headscarf that made him look like somebody’s grandma. 2 or 3 minutes passed and I got up to retrieve the bookmark. It was on the floor. Next to it was about an inch and 1/2 of the cord. The other 10 inches of cord, including metal bead, were nowhere to be seen. Cash was lying nearby, slowly and contentedly waving his tail around, as cats do. We made eye contact. “You didn’t”, I said. Cash said nothing. Panic ensued.

Having been through a similar incident involving curling ribbon with my late, great persian Spiffy, I knew that when a cat eats a long piece of a non-organic string, it can be a very bad thing. The string generally needs to come out of the cat before it leaves its stomach. Past that point, you are either going to get really lucky or have a seriously messed up cat. Given my experience in this area, one could logically wonder why the hell I was playing with my cat with a piece of string. Good question. All I can say is that he’d been messing around with this bookmark for a month or so and had never shown any interest in eating it like a piece of spaghetti until that night. Frankly, I blame Prince.

The rest of the night was spent alternating between the kitty E.R. and a local bar. My boyfriend rules for recognizing that I was on the verge of hysteria, insisting I pick him up and that we go for martinis while we waited for news and the okay to visit.

The doctor at the Emergency Clinic tried 2 methods to get Cash to barf. Of course he would not. Without getting too graphic, suffice it to say that valiant efforts were made attempting non-invasive ways to remove the string from the cat. In the end, the Cash man had to have surgery. BUT, all is well. The string was removed (all in one piece – yuck!). Cash got his stitches out yesterday and is 90% back to normal.

And I’m now working toward a string-free home.