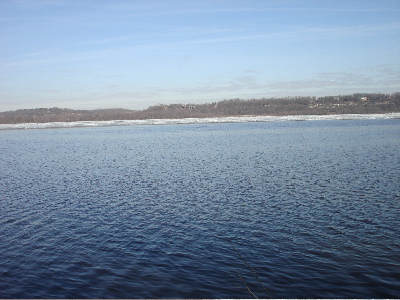 (The river. Eagles are sitting on that ice, I swear. You just can’t see them.)

Tired of my dorky musical references? Then you probably shouldn’t read my blog.

Last Sunday, my Dad and I drove to his favorite super secret eagle viewing spot. (Can’t tell you where. Would have to kill you.) It was a beautiful day, cold, but sunny and clear. I’d never seen the bald eagles that reportedly frequent the river banks, but Dad had seen them…approximately a handful of times in 3X as many attempts. Pessimist that he is, the Dad was afraid we might not see any eagles, but I was pretty confident we would, for no reason other than that my Dad and I were due for some father/daughter bonding and I figured that as we’d made the effort to gear up and get out early, the universe would gift us some dang eagles. Plus, Dad knows his stuff. He’s Mr. Outdoorsy and had predicted it would be a good eagle viewing weekend as the river had frozen over and was closed to barge traffic. 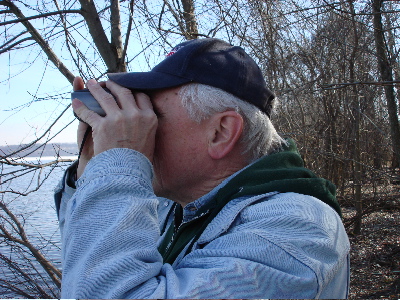 (Dad checking out the scene with the binos.)

WE HAD SUCH A GREAT DAY. There were no other people around other than Dad and I. We walked for a half hour. Then, after unintentionally scaring off a few eagles nestled in trees 100ish feet away, we got lucky. We stumbled upon one in a tree, and though he undoubtedly knew we were there, he hung out for 10 minutes or so, long enough for us to get close up views through our binoculars. From that point we lost count, but I’d guess we saw at least 25 eagles in the course of an hour. It was breathtaking. I know that sounds so geeky, but it WAS. As Dad said, the birds truly are majestic. Another highlight: a baby eagle that circled and soared above us for the longest time, clearly aware of our presence. It was almost as if he was playing with us. 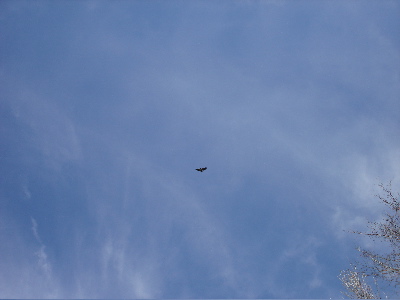 (Our buddy, the baby eagle.)

Days like this put it all in perspective. Life is short. Spend time with people you care about and GO OUTSIDE. End of sermon. For now.