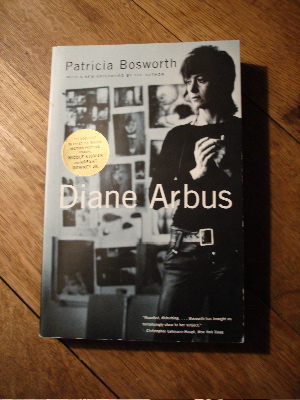 (This kick ass cover photo could single-handedly revive the black leather pant, and possibly the shag.)

Diane Arbus began taking photographs in the 1940s as a young married woman in partnership with her husband, Alan Arbus. Although she came from a background of privilege and was well schooled, Arbus was not a classically trained artist when she started her career in photography. She was very focused on her role as a wife and mother and embarked on a career only because her family needed the money. The Arbuses’ early work focused on magazines and the fashion industry and was very traditional versus the style of work for which she is now known.

Arbus came into her own as an artist after splitting from her husband. (She never quite recovered emotionally from this loss, and certainly, her loneliness contributed to her ongoing depression.) Once solo, she continued to work in the field while studying with various photographers, the most influential of which was Lisette Model. As Arbus’s style evolved, she immersed herself in photography as a way of life, rarely photographing a subject with whom she hadn’t formed some kind of connection or relationship. This often involved going into subjects’ homes or environments (hotel rooms, mental institutions, the circus), and forming friendships and/or sexual relationships with them. 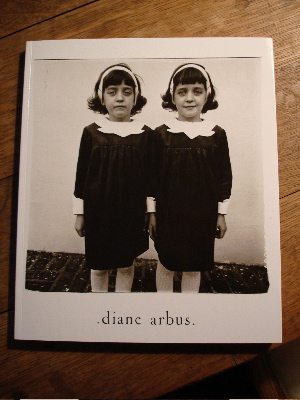 In the 1950s, when Diane Arbus truly found herself artistically, photography was only starting to evolve as an art form. Thus, her stark and focused style and choice of subject seemed all the more shocking. Arbus was drawn to the fringes. She sought to get to what was real beneath each subject’s seemingly unreal exterior. As I reached the mid-point of Diane Arbus: A Biography, realizing that I was only peripherally familiar with Arbus’s work, I purchased Diane Arbus: An Aperture Monograph from Amazon. Having read so many of the back stories surrounding Arbus’s work, I needed the photos by my side as a point of reference.

The introduction to An Aperture Monograph was the perfect postscript to the biography. Shortly before her suicide in 1971, Arbus taught a series of small classes because she needed the cash. At least one of the incredibly lucky participants taped the classes, and the introduction to An Aperture Monograph consists of transcripts from them as well as excerpts from interviews with Arbus. 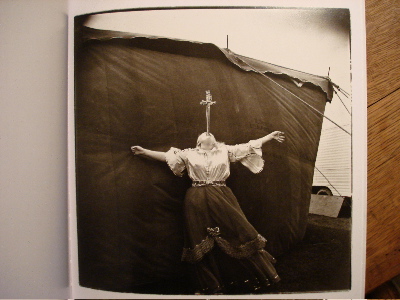 (A favorite Diane Arbus photo, from An Aperture Monograph)

In the transcripts, Arbus’s voice is pure and unfettered by the art school affectation that does nothing (for me, anyway) to explain what is really behind an artist’s work. In discussing the “gap between intention and effect”, Arbus said:

“Something is ironic in the world and it has to do with the fact that what you intend never comes out like you intend it. What I’m trying to describe is that it’s impossible to get out of your skin into somebody else’s. And that’s what all this is a little bit about. That somebody else’s tragedy is not the same as your own.”

Arbus’s 2 daughters are both artists. Amy is a photographer who, as far as I can tell (I’m not that familiar with her work) is very heavily influenced by her mother’s style. I’m not sure what I think about this. For some reason Julian Lennon is popping into my head as I type. Enough said. 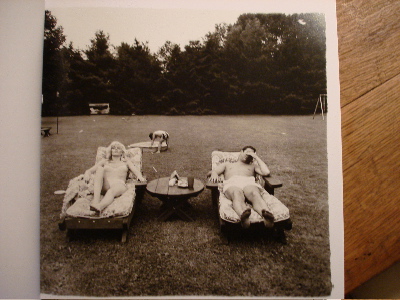 (Another favorite Diane Arbus photo, from An Aperture Monograph)

I am anxious to see the film “Fur” which is a fictional account of a segment of Diane Arbus’s life and career. No point in doing any casting as Hollywood has deemed Nicole Kidman (of all people) as appropriate for the role. I think I’d’ve leaned more toward someone serious like Catherine Keener, but as usual, nobody asked me. I’ve already decided that the film will be terrible and annoying, but I’ll see it anyway. If nothing else, it will be interesting to see what the writer and director found intriguing about Arbus’s life. To cleanse my mind and hopefully yours of the image of Nicole Kidman playing Diane Arbus, I leave you with this:

“Nothing is ever the same as they said it was. It’s what I’ve never seen before that I recognize.” – – – Diane Arbus