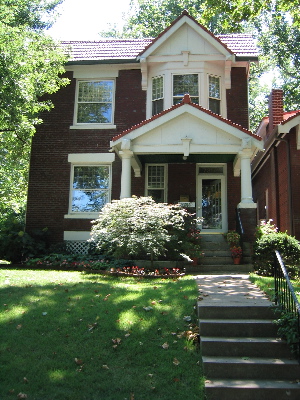 (My house, in nicer weather and before I killed the lawn.)

Somber blog post alert. Read only if you are up for a rant.

I’ve not been much of a blogger lately. For awhile I was busy getting ready for Rock*n*Roll Craft Show and working on wedding invitations for a friend. Then I was tied up at work, doing things like, you know, attempting to start a crusade against unflattering office lighting. (Kidding. I actually do have a lot going on at work right now. But flourescent lighting really IS the enemy of anyone over 30 that gives a damn what they look like at work.) And now, when I actually have some time to catch up on blogging, all I can think about is how PISSED OFF I am at Ameren UE.

Yes, I am one of the at one time, half a million, people in St. Louis without power AND heat. It’s been out since Thursday night. Last night (Friday) we slept in the house. The temp was 45 degrees. We buried ourselves under my down comforter and piles of blankets. One of the cats climbed on top of us, and in Survivor mode ripped a hole in the comforter and climbed inside. The other cat slept on top of him. We made it through the night in our mound of body heat, but today as the temperature inside continued to descend, I waved the white flag, turned off the water, packed a bag and evacuated the cats to Roy’s house. It’s nice and warm here, but the cats are completely freaked, on a hunger strike and won’t come out of hiding.

THIS BLOWS! It’s unbelievable, really. One of my neighbors ambushed the Ameren UE truck seen driving through our neighborhood today and was told “We can’t give you an estimate. There are so many problems in this neighborhood. It could be 4 or 5 days.” So we are all supposed to live with that? What is this, India?

My office is only a few blocks from the Ameren UE headquarters. Despite the potential fallout of being seen shrieking on the 5 o’clock news, I’m pissed enough to incite and lead an angry mob of protesters to surround the place and demand, I don’t know, something better than this!!! I would wager that none of the top Ameren execs are without power right now.

I suppose it could be worse. I know it could be worse. At least I have a place close by where I can go. But it’s very unsettling to have to close up and leave your home. I haven’t been a homeowner for very long, less than 4 years, but my house is a big part of me. It’s one thing to choose to leave home for a trip or something, but to have to leave because basic services that you take for granted aren’t available is an entirely different matter. Well, I will quit my bitching because what I’m dealing with is nothing like what so many New Orleanians dealt with. Yes, it could be worse. But (Ameren, are you listening?), it definitely could be better.

Rant over. For now.